The children sit rapt as Rosalbina Valerio, 77, recounts a traditional fable in her native Jaqaru, a language now so rare that it is spoken by only 580 people in three villages scattered along a precipitous valley in the Andean foothills above Lima.

The story, about a pale-skinned demon who turns up for dinner but then attempts to eat his hosts, offers a revealing glimpse into the Jaqaru psyche, and how this indigenous culture has been under siege ever since marauding Spaniards first showed up here in the early 16th century.

Ms Valerio is in the school, in one of those villages, Tupe, as part of a government programme to prevent Jaqaru – once spoken in the great Wari empire that preceded the Incas – from becoming extinct.

Peru once had 84 languages, scattered mainly around the Amazon and, to a lesser extent, the Andes. It is now down to 47 and expected to lose more. After Spanish, the most widely used is Quechua, the language spoken by the Incas.

Only 100 miles from Lima, Tupe could hardly be more isolated. Perched on a saddle overlooking a deep valley, 3,000 metres above sea level, the village is a hair-raising five-hour drive from the capital, via unpaved roads capped off by an arduous hour-long walk up a mountain path. 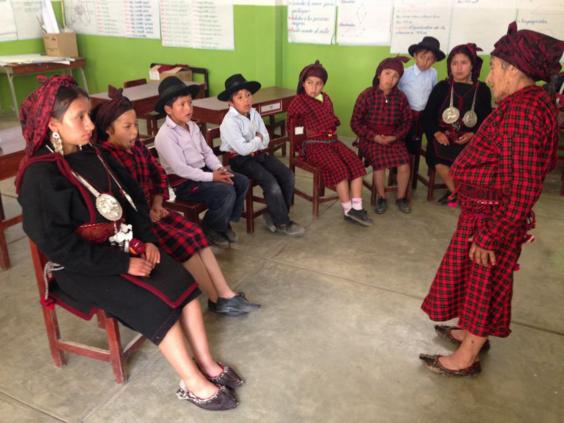 With almost no economic opportunities other than small-scale farming on the valley’s steep, terraced slopes, migration to Lima and other cities has only deepened since the 1980s when a first wave of Jaqaru fled the violence of the Shining Path terrorists.

Of the village’s 160 youngsters, half attend schools on the coast, and only return to Tupe occasionally. But for those who remain, Ms Valerio has a message: “If we lose Jaqaru, then we lose our entire culture, and then we are nothing”.

“It’s the parents,” she says. “Mine were illiterate and never learnt Spanish. But today, many prefer to speak Spanish even at home, with their children. They think Spanish is cool, but they will never know what they have lost.” Lev Michael, a linguistics professor at the University of California, Berkeley, believes the root of the problem is the widespread apparent disdain for native cultures, in Peru and around the world, which he calls “racist”. It is such disdain, he says, which leads to many indigenous people renouncing their own identity.

“There is nothing to be ashamed of,” insists José Martínez, a bilingual primary school teacher. “Why is Jaqaru less than Spanish or English?” Yet Mr Martínez also struggles to ensure his pupils learn Jaqaru. Although he is grateful for the centrist government of President Ollanta Humala encouraging Ms Valerio to teach the native language and culture at school, he is still waiting for the education ministry to provide books and other teaching materials in anything other than Spanish.

“It’s not enough to just learn [Jaqaru] at school. They need to speak it at home,” adds Mr Martínez. “It all depends on us. We need to have the whole community involved.”

Jaqaru’s plight is typical of the loss of native languages around the world, particularly in Africa, Asia and Latin America. The Linguistic Society of America has predicted that of between 5,000 and 6,000 languages in use globally, fewer than 1,000 may have survived a century from now.

That presents a headache not only for numerous ethnic groups fearful of losing their identity, because of globalisation. The window is also rapidly closing for linguists to carry out all kinds of research that range from the origins of humankind to how our brains work.

“It would be like Darwin faced with a dog, a cat and a cow and trying to deduce the theory of evolution,” says Professor Michael. He is currently  studying another language even rarer than Jaqaru. Only 15 people in Peru’s northern jungles still speak Iquito –  and the youngest is 70.

One of Professor Michael’s startling discoveries is that in Iquito, tenses can change from past to future simply by switching the word order. “This is the first known case,” says Professor Michael. “Until Iquito, linguists didn’t know that that was even possible.”

Back in Tupe, Ms Valerio ponders Jaqaru’s future. “The Incas came to conquer us but they couldn’t,” she says as she takes a break from teaching fables. “We used to be rebellious, real warriors. But everything is changing now. We have a different fight on our hands, just to keep our language and culture alive for our children and grandchildren.”